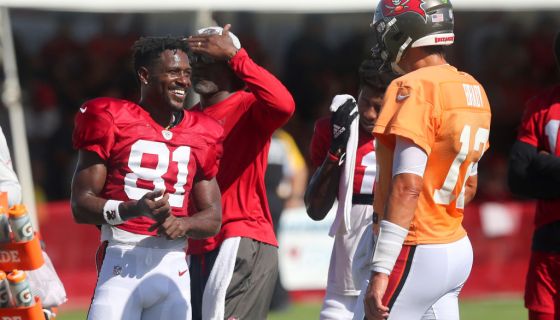 Source: Icon Sportswire / Getty It’s one thing to bite the hand that fed you but to bite the hand and then make lewd innuendo about the hand’s newly-exed wife is pretty low down. However, if there’s one thing we’re sure of it’s that Antonio Brown has no floor too low for him to limbo under. The embattled baller has been taking shots at his former benefactor Tom Brady for weeks now following news that Brady and his now-former wife were getting a divorce after 13 years. Yesterday, Brown posted a photoshopped picture of Gisele’s face edited onto the body of a nude woman. No caption, no explanation, no meme, just a fake photo. Not that a bunch of words would have made this any less inappropriate but damn. AB recently appeared on the Patrick Bet-David podcast and was asked directly what his issue with Brady is but no real answers came of it. As some of you are aware, Brown was all but done in the NFL after sexual abuse allegations and strange behavior on and off the field completely destroyed his reputation. However, because of his extreme talent Tom Brady came a-callin’ and provided a shield from the
Read More